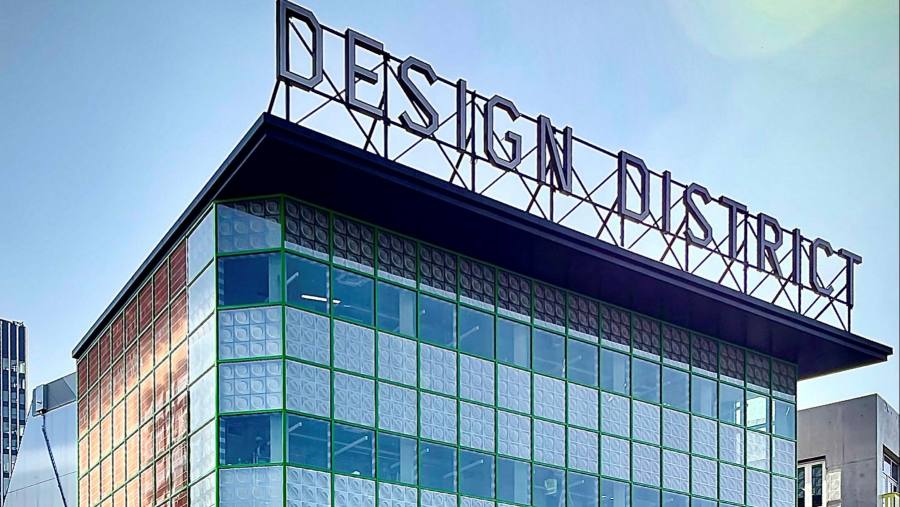 Sign up for myFT Daily Digest to be the first to know about architecture news.

The “exquisite corpse” was the favorite game of the surrealists. Players continued with a phrase or drawing on a folded sheet of paper, not knowing anything that had happened before. The end result can be a surreal masterpiece, a fragment of a dream, or a total mess. Most of the new developments in London appear to have been designed like this, but a small part To was designed like that. And it looks pretty impressive.

It seems a bit presumptuous to call this area the “Design District”, but that’s what Knight Dragon, developer of the larger Greenwich Peninsula project, did. She tore a small space towel from a vast slick of fittings and towers, most of which have yet to be built, and dedicated it to the creative industries. It’s an unusual approach: the most successful design districts tend to be adapted from existing districts, often from buildings abandoned by other industries.

Here, the Hong Kong-backed developer predetermined the fate of this little corner of the city and crafted its future through more affordable rents to attract creative businesses, subsidized by other rents into its developments.

We know it’s a design district because it says it in big letters atop a cheerful, rather retro-looking red brick and glass building designed by architect David Kohn. The letters look like those signs left behind in the days of pre-digital advertising, possibly for a product that no longer exists.

Sixteen new buildings by eight architects make up the district, organized around four small courtyards and a central square. It is permeable from all sides, open to the public at any time of the day. At one end is a yellow caterpillar of a building, wriggling around the square. It’s a remarkable thing with a childish, bouncy aesthetic. This is the dining room, designed by the Spanish architects SelgasCano. Completely transparent, with a banana yellow frame, gullwing doors, an opening roof and plenty of trees inside, it aims to achieve the elusive interior-exterior dear to architects. It is reminiscent of the fantasies of the Pop and High-tech architects of the late 60s and 70s that never seemed to really work in real life. Maybe it will be. Although, in renderings and models, it also looks disturbingly like a dayglo unraveled condom from a pub vending machine.

The buildings are designed with workshop spaces on the ground floor and studios and offices above. The amount of production that will take place here is questionable, but it makes for a good story. They are all very different, and some are deeply enjoyable. Two architects 6a buildings are chamfered back to allow a bit more light down to ground level and are clad in a harlequin diamond pattern, expressed in a meaty pink and gray terrazzo with oversized windows on the sides. They are surprising and pleasant, inspired, says the founder of 6a, Tom Emerson, by the formica sculptures of Richard Artschwager.

They also contain a little nod to late British Modernism and it’s clear the architects were working on these designs in tandem with their MK Gallery in Milton Keynes, with its oversized circular window and shiny metal. These diamond openings also create spectacular interiors (whose inexpensive cinder blocks and plasterboard were left raw and exposed in the vein of the first Frank Gehry) and a convincing double-height upper story with expressionist sharpness.

Two buildings of the Italian-Spanish Barozzi Veiga bring a touch of brilliant continental modernism to the site with their facades clad in aluminum. One of these buildings is occupied by the Ravensbourne Institute for Creativity and Technology design school. This will serve as an annex to its building next to the O2 Arena, a design school without workshops.

A white building with wobbly walls designed by HNNA contains the co-working space and the site club (the latter beautifully furnished by architect Roz Barr). An Architecture 00 building brings a touch of Berlin to the site with its open concrete frame and spacious interiors. A sculptural public staircase sunk into the street invites people to cross the terraces. The whole thing is wrapped in a wire mesh that extends to the top of the building below (an outdoor basketball court). Very urban. It looks like a beautiful building. Their other structure is still under construction and seems enigmatic.

The buildings look drastically different but seem to get along quite well, albeit with a slight feeling of an architectural petting zoo

Two buildings clad in metal by Mole Architects define an edge of the site, one in rusty corten steel, the other painted in an iridescent dichroic finish. The other side is made up of two Kohn buildings, which form a sort of sturdy brick walkway to the bus station opposite and the strips of land still unexploited but which will soon be overexploited. Kohn clearly had fun. With heavy brick columns, a green latticework of a facade and etched glass in block patterns, he plays with reality and representation, with scale and style. There are obvious references to James Stirling’s Clore Gallery at Tate Britain, Aldo Rossi’s later work, and Venturi and Scott-Brown’s celebration of the sign and the building as a sign in those huge letters on top.

The attempt here to create a dense, urban and consciously designed neighborhood seems to be working. The buildings look drastically different but seem to get along quite well, albeit with a slight feeling of an architectural petting zoo. The problem is more likely to be the environment. One hundred and forty-seven acres and £ 8.4bn of investment are going to need a return, and the tiny design district will be surrounded on three sides by forty-story towers.

The neighborhood still looks odd with the Millennium Dome (now the O2 Arena) designed as a temporary structure to kick off the redevelopment of North Greenwich, now oddly established as a local landmark. It leaves undefined spaces all around, one filled by Ravensbourne, the other by Diller Scofidio + Renfro, the uncomfortable echo of their New York High Line, the “Tide”. The latter creates obsolete infrastructure rather than reusing it.

The question is whether this designated design district is intended as a stand-alone trinket or a tool for carving out a larger creative district. If it is the latter, the surrounding buildings will need similar attention and intensity, which seems unlikely. But an island is better than nothing. This is a rare example of a developer using the architecture to generate interest rather than as a rain screen for a generic investment product. It’s a common approach in France and Spain but it looks fresh here. Perhaps his influence will spread outward.

Edgewater resident celebrates with those who made his home accessible –…