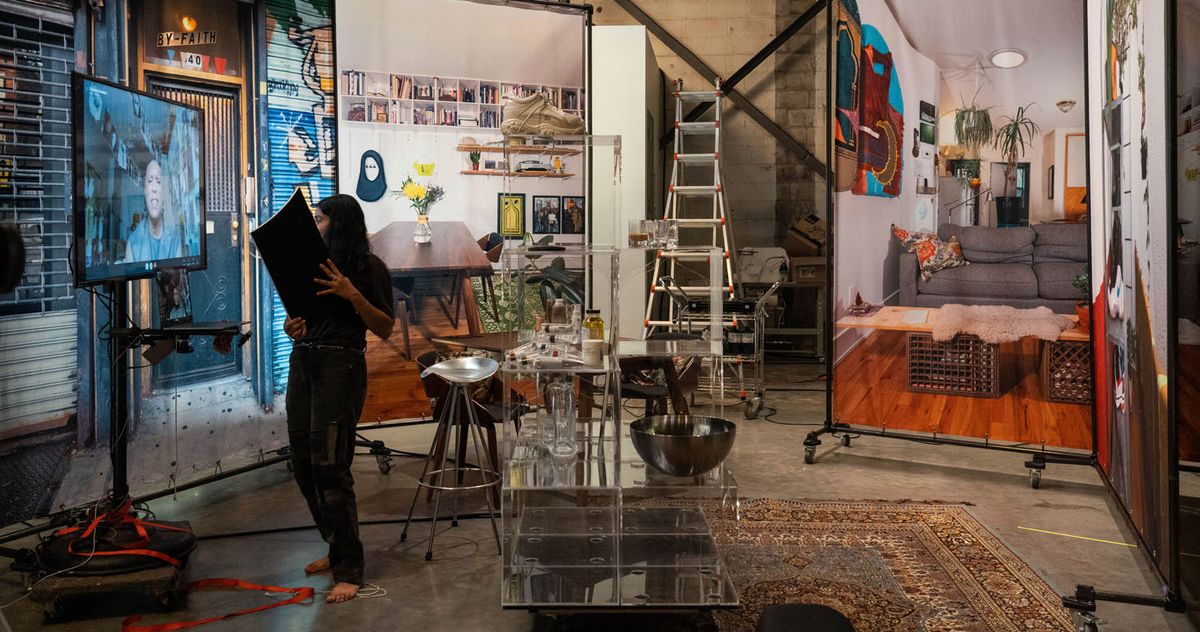 In a gallery on the Lower East Side several years ago, Baseera Khan washed his face with black chalk dust and climbed a wall implanted with grips molded from his own body – an ankle, a knee, a bent elbow filled with gold chains and hair. This ritual performance was part of IAMUSLIMA, their first solo exhibition at Participant Inc., which explored representation, self-censorship and assimilation as an American Muslim, woman and immigrant. Since then, Khan’s conceptual practice has continued to use performance, fashion, installations, textiles, and sound to deal with cover-up, state violence, surveillance, and the pitfalls of identity politics. . On October 1, they opened their first major solo exhibition at the Brooklyn Museum, “I Am an Archive,” as the winner of the UOVO Prize for Emerging Brooklyn Artists. In addition to work from the past five years, they feature new photographs and sculptures, including photographs inspired by the museum’s collection of Islamic art and a series of Day-Glo chandelier sculptures that reference the collection of textiles from the Khan family.

Last fall they shot a cure for a TV series, By faith, based on intimate conversations with friends such as artists Vaginal Davis and Munira Lokhwandala in a reconfigurable set that mirrored their own apartment. The show has broken down the lines between the isolated domestic life of the pandemic era and the (at times) socially rich online one. Rehearsals and recordings for the show have been broadcast live by Chelsea’s arts space, The Kitchen, and Khan is currently raising funds to film a pilot. The show’s backdrops, which were large-scale images of rooms in their home, also took on new forms in another show. Curbed caught up with Khan in their kitchen after returning from a residency at the Lux Art Institute, where they prepared pieces for their exhibition at the Brooklyn Museum.

When the kitchen asked me to move into the Queenslab for a residence, there was so much space. I had been a little tired of the materials and the objects. So I offered to create a TV show about me living in this house during COVID where I have been for ten years. I wanted to do a weird, weird show that looked a bit like a meeting between a Fassbender movie Pee-wee’s playhouse.

The show is called By faith because there is a sign that says that on the door of my apartment. About 14 years before I moved in, there was a spiritualist living here, and that was his business. The fact that my house already had a title was just one of those stupid things that are always where you are, Oh, why do I need to be conceptual when this life I’m living is already steeped in concepts?

I have dreams of a fever, and a lot of the work I do is through those dreams of a fever. And when I had COVID, I had all these miracle people that came to me in my life that were like ‘Oh let’s paint’ or ‘let’s cook together let’s read a book together. I decided to do six episodes of myself with my friends. Sometimes we are on my bed. Sometimes we work at the table. But because we are dreaming, you never really know where you are.

For the decor of my home in the Kitchen, I initially wanted it to be round, and I wanted the cameras to be nested within the scene. But then I started working with the team, and they helped me make some creative moves. We decided we needed to move. We pushed the whole project to the back of the space like an amphitheater. We had everything on wheels, so we moved the screens back and forth.

The backdrops of Baseera Khan’s “By Faith” play in the kitchen.
Photo: Ariana Sarwari

For Miles McEnery’s show series, “Light,” now on display in Houston at “In Place of an Index,” I removed these backdrops and attached them to a bust, like the one you see at a tailor’s shop. . I made my own stick on a microphone stand that protrudes from the wall and used a selfie light ring to hang the textile on this structure. The selfie light made sense, since we’re still in front of screens now. Even the most mundane type of business that doesn’t shower has a selfie light because their business demands it. Part of it has to do with monitoring, but the other part is just a matter of aesthetics, companies wanting a unified appearance. I had started doing all these performances where I actually had to get my own selfie light kit. And so I thought, since I had it all around me, Why not put that back into this sculpture, the genesis of which was actually a TV show with lights and microphones and all that? They still look like backdrops – they’re grommet and the poly material indicates that it’s a theater material but also a corporate backdrop.

I was sick of COVID when I offered the TV show. I was in bed most of the time with my computer and my sketchbook and texts, and all kinds of food and all kinds of things. Many shots from the Kitchen video were on the bed. I started to see these patterns that I was doing with my own body under the covers. There are all these different patterns crystallized in the way I turned certain areas on the wall for the sculptures. It almost looks like you’re in bed and restless, then you stop still for a second. I thought it was interesting to collapse the architecture and the interior. I am not thinking of interior decoration but of accumulation. My house as beautiful accumulation, the apartment and the accumulation collapsed on this formation of my body.